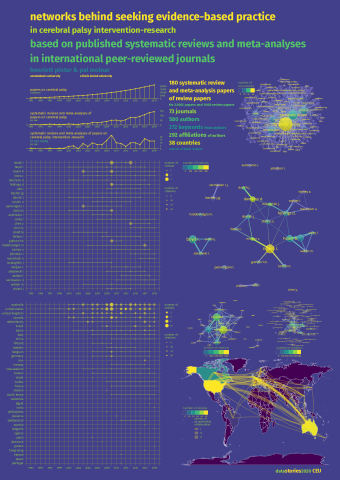 Brief description:
In this work we show the visual representations of the collaboration network and productivity of the reviewer researchers of cerebral palsy intervention-research. Cerebral palsy is an umbrella term for describing "a group of permanent disorders of the development of movement and posture, causing activity limitation, that are attributed to non-progressive disturbances that occurred in the developing fetal or infant brain" (Rosenbaum et al. 2006). It has various forms, that is "often accompanied by disturbances of sensation, perception, cognition, communication, and behavior, by epilepsy, and by secondary musculoskeletal problems" (Rosenbaum et al. 2006). Plenty of researches deal with the disorder, however, choosing the best available, effective and cost-effective interventions is difficult for clinicians, families and healthcare professionals when needed. Reviewing of research reviews is a good way to find the best published intervention evidence. Our aim was to investigate the productivity and network structure of the researchers conducted the reviews of systematic reviews and meta-analyses. We used Scopus to collect bibliometric data of published review papers. In this visualization we show the main trends of the productivity of top authors and their countries, and the co-authorship connections between authors, their institutions and countries.

A clear message of what the visualization reveals:
Our visualization reveals the leading researchers, institutions and countries focusing on reviewing evidence based research for data-driven decision-making; this knowledge gives navigating points to the practitioners, the families of the clients and the researchers of the field.
Back to Collecting Page