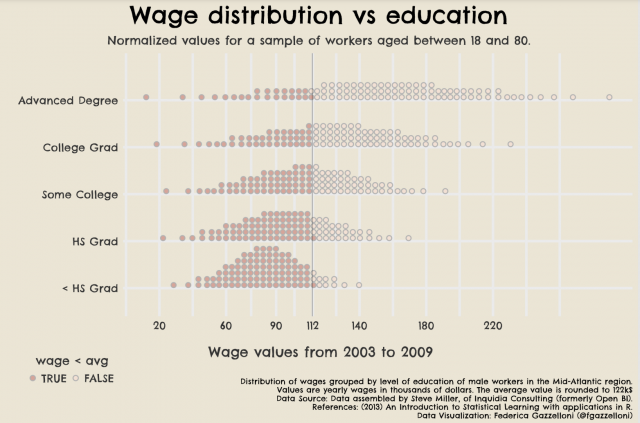 This graph summarizes the distribution of wages grouped by the highest level of education reached by male workers in the Mid-Atlantic region. The wage values are normalized for a sample of individuals aged between 18 and 80, from 2003 to 2009. In particular, different shapes of the distributions show the high variability of wages when based on the level of education reached. For example, workers who reached an advanced degree level record the highest level of variability in yearly wages, while the lowest level of variability and so a tendency to normal trend belongs to high school graduates. This data clearly shows that the highest is the level of education reached, and the lowest is the level of stability in yearly wage. On the contrary, the graph shows that the workers who reached an advanced degree level have above the average level of yearly wage, at opposite the majority of high school graduates' yearly wages are found to be below the average. The values are Yearly in thousands of dollars, and the grey vertical line dividing the distributions into two sides is the average value of the wage by educational level rounded to 122k$.