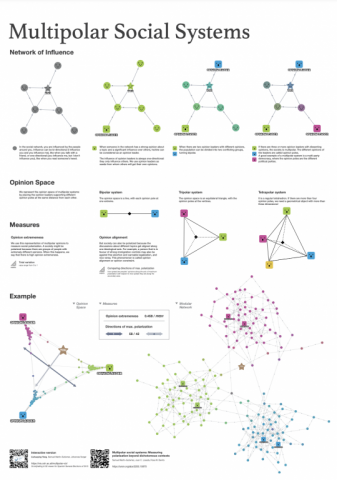 Social polarization is a pervasive phenomenon in today’s societies, causing concerns worldwide due to its pernicious effects on democracy. There are many models and analytical methods to understand polarization in binary conflicts where two groups support opposite ideas, such as the two-party system in the United States. However, there are very few tools to quantify polarization in scenarios with more than two discrepant factions (multipolar systems), like European multi-party democracies. At the Complexity Science Hub Vienna and the Universidad Politécnica de Madrid, researchers aim to facilitate the understanding of this phenomenon through an analytical framework that reveals the intricate polarization patterns in multipolar systems. This framework consists of a model of multipolar opinion spaces, a method to infer multidimensional opinions from social interaction networks, and multidimensional polarization metrics that quantify several aspects of ideological polarization and bring new insights into the analysis of high-dimensional opinion distributions. By illustrating the essential components in this research, i.e., the network of social influence, the opinion space, and the metrics, this visualization decomposes the complex methodology into digestible bits and makes it accessible to a broad audience. Through scrollytelling, our interactive online tool presents simple examples that are then used to explain advanced network models, including a real-world scenario with four poles (3D opinion space) of the Spanish General Elections of 2015.
Back to Collecting Page