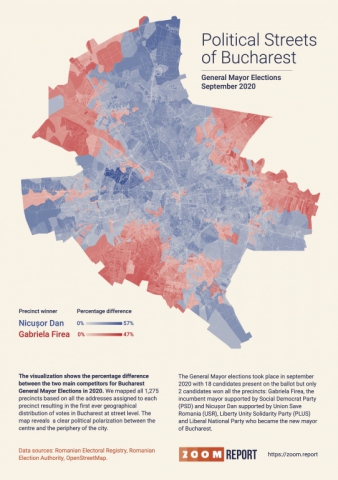 The visualization shows the percentage difference between the two main competitors for Bucharest General Mayor Elections in 2020. We mapped all 1,275 precincts based on all the addresses assigned to each precinct resulting in the first ever geographical distribution of votes in Bucharest at street level. The map reveals a clear political polarization between the centre and the periphery of the city.

The General Mayor elections took place in september 2020 with 18 candidates present on the ballot but only 2 candidates won all the precincts: Gabriela Firea, the incumbent mayor supported by Social Democrat Party (PSD) and Nicușor Dan supported by Union Save Romania (USR), Liberty Unity Solidarity Party (PLUS) and Liberal National Party who became the new mayor of Bucharest.